Surrey Football for all League

SURREY FOOTBALL FOR ALL LEAGUE

Providing Inclusive Football for Disabled Players of All Ages and Abilities

The Surrey Football For All League provides organised, fun football for players with any type of disability or mental health problem. Fixtures are held once a month throughout the season, with teams competing from across Surrey and the South East.

The league has 4 Adult divisions and 3 Junior divisions (U16 Premiership, U16 Championship and U12), and caters for all levels of ability, as well as any individual that wants to come along and try football. We will never turn a player away, so even if you don’t have a team, come along on the day and we will find you one!

For more information on the league, including dates, venue and divisions, click the 'About' button below. To go through to Respect and League Results, click the 'Results' button.
Follow @footballforalll

Following a meeting of the League’s committee on 29th March, we are pleased to announce that we will be running two summer tournaments in June/July.

One of these will be for our youth teams, and the other for the adult sides. We are hoping to clarify dates for these in the coming weeks and will provide an update as soon as they have been confirmed. The tournaments will have a Euro 2020 theme, and we would love to hear ideas from players, parents/guardians and coaches on how we can make these days special!

Ahead of these tournaments, we will be holding a league meeting on 19th May. We would be happy for anyone else to join this, who may wish to be involved in the planning/running of the tournaments to support us with these tournaments. Please contact the League's Marketing Officer James Chadwick if you would like to join.

Following a meeting of the Football for All League Committee on Thursday 17th December, the League has made the decision to cancel the 2020/21 league season.

​We do not believe it that is safe for the league to take place, and the health considerations of players is, as always, our main priority.

The need for Thursday’s decision was only further emphasised by the announcement from Government on Saturday 19th December to move most of Surrey into the new Tier 4 restrictions, following the alarming rise in cases within the region.

We understand the importance of the League to our participants and their families and hope the situation will have improved significantly later in the year, so that we may hold a tournament in the spring.

The Committee has also made the decision to postpone our planned January AGM until March 2021. We shall communicate details of the meeting once the date has been finalised. 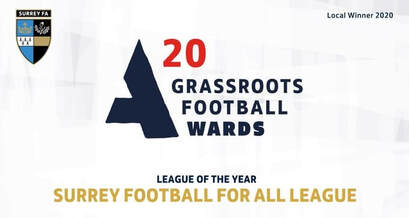 
The awards are to recognise and reward the people, clubs and leagues that deliver grassroots football throughout the country. The awards are split into categories, and County FAs select a local winner for each from the public’s nominations.


On receiving the award, League Chairman Dennis Jones commented, “This year has been full of challenges and emotions, so to receive such good news will be a great boost for all the clubs, volunteers and players involved.”
It is a tremendous honour to receive the award, among a field of fantastic nominees. We would like to thank all of the clubs, coaches, players and referees who make our league such a fantastic place to play football. We would also like to thank the League’s sponsors AllenBuild for their continued support, in addition to division sponsors B.A. Champion Roofing, RWW Plumbing & Heating Ltd. and Designer Electrical Ltd.

​Following The FA’s announcement on 26th March that all Grassroots football has now been concluded, the league Committee has agreed to award winners based on results so far over the six tournaments that have been played. More information on the FA’s decision can be found on Surrey FA’s website here.

The trophies and medals themselves will be awarded once the new season starts up again. We’ll continue to monitor the situation and be in contact once we are in a position to book league dates in for the 2020/21 season.

So, without further ado, please see the winners of both the Respect and League tables for each division below!

Congratulations to all the winners, and a huge thanks to everyone who has taken part in the league this season, we hope to see you all soon. In the meantime, we hope everyone at your club stays safe and well during this difficult time 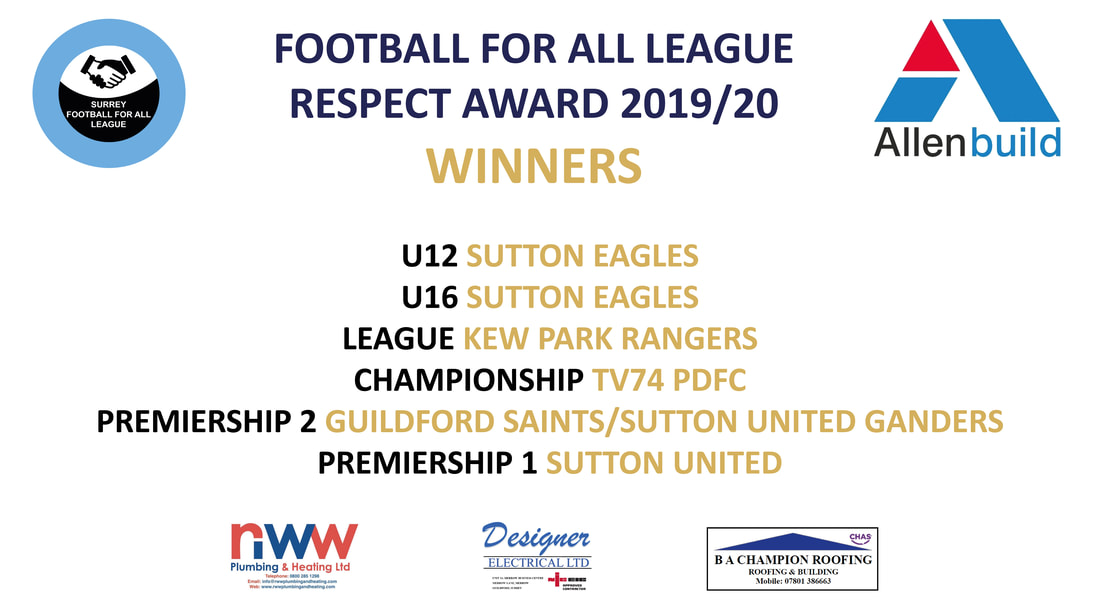 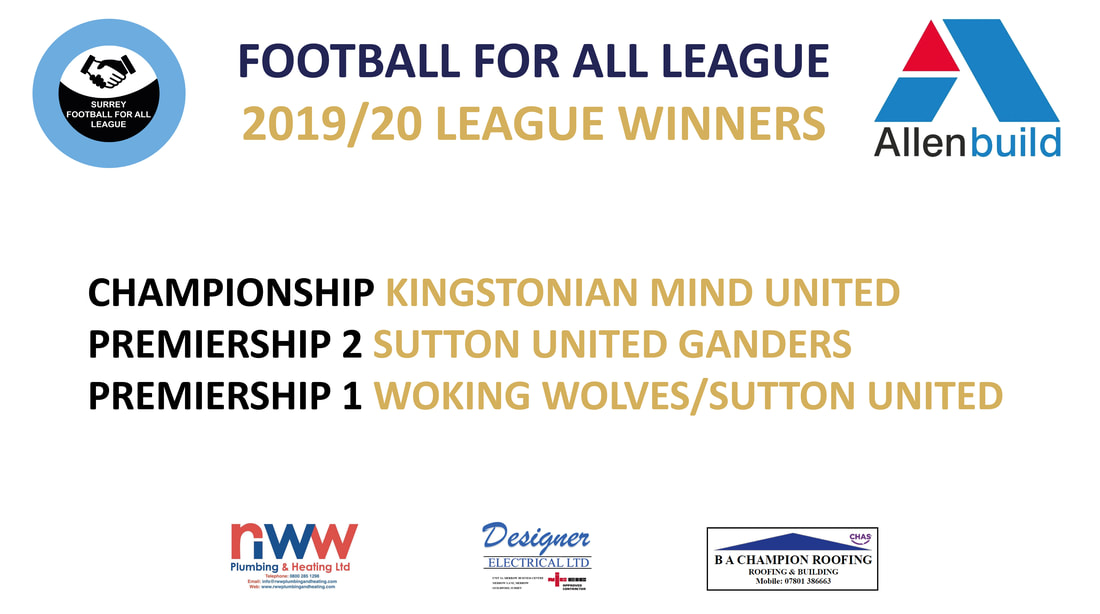 Due to FA and Government advice released on 16th March 2020, all grassroots football in England is postponed for the foreseeable future.

This includes the Surrey Football For All League, so we can confirm that the league fixtures due to take place on 29th March will be cancelled. We will continue to monitor the situation regarding the April and May tournaments and communicate to everyone in due course.

As a committee, we will keep teams updated on any decisions regarding the league.

Any further information about how Coronavirus is affecting grassroots football can be found on the Surrey FA website here, and there is also an FAQs section available.

If you have any questions, please refer to this page of the website in the first instance, and if the answer cannot be found there, please email Surrey FA on info@SurreyFA.com.
​

Courses and Workshops 2020
​
The Surrey Football For All League are pleased to be working with Surrey FA and the Mary Frances Trust to host and support a range of courses for players, coaches, referees and volunteers involved in disability football in Surrey.
​
Funding towards the courses has been generously provided by Community Foundation Surrey and the Edward Gostling Foundation so each course is being offered at a significantly reduced price.

Two of the courses are aimed specifically at those involved in the league who have a disability or mental health issue, and the other three are open for anyone involved in disability football in any capacity to book onto.
Full details, including a booking/ expression of interest link, can be found below.